First Post, or Why Coot Veal and the Vealtones Know How to Rock

This is my first post, my first tinkering into the baseball card blogosphere. I've been reading and commenting for a while now, and it's about time I contribute.

To get started, I thought I'd talk about the title of my blog. Why Coot Veal? you ask.

I grew up with a dad who owned a mom and pop record store called The Sound Depot. What's a mom and pop store? What's a record store? I'm not talking about Best Buy here. Before K-Mart and Wal-Mart moved to town and choked out small business, my dad's store was one of those artifacts of awesomeness from the '80s where cassettes and 45 singles and LP and eventually CDs filled the shelves. He stocked all the best music you never heard of and could order anything. In fact, he used to get crazy orders all the time. Often people would call and ask if he had so-and-so, and his favorite response was: "We don't have them, but we do have Coot Veal and the Vealtones." Now, I'm not sure why this was an effective business strategy, since I imagine he incited a gaped-mouth silence in his inquisitive customers. But my dad always had a good sense of humor, and when customers got his jokes, they stuck around.

On one occasion of my dad claiming he had Coot Veal and the Vealtones on vinyl, a caller surprised my dad, responding, "Coot Veal. Short stop for the Tigers in 1959." The caller came to the store to pick up his order a few weeks later and gave my dad this card. 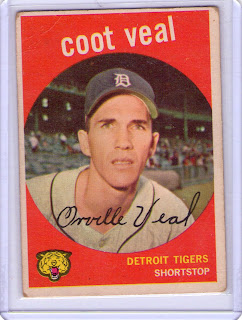 My dad brought the card home to his pre-adolescent son, who had just started getting into the over-produced junk of the late '80s. When I saw this card, I was struck. I was hooked. Now, here was a baseball card. I thought I'd just won the lotto getting a card so old, and this card became the coolest thing I owned, just surpassing my 45 single of Weird Al's "Fat." I couldn't believe some stranger could be so nice to give a gem like this for free to some random record store dude. My dad was cool before this for being the pop culture epicenter of our small Midwestern town, but this turned my dad into a legend in my eyes.

As an older, wiser collector, I knows this card is pretty beat-up, but I still treasure it. It's the card that cemented my interests in baseball cards. The musty smell of aging cardboard, the old Tigers logo, Coot Veal gazing full of hope through a knothole of deep red--what kid wouldn't be thrilled.

Since I got back into trading a couple years ago and started trading with the baseball card blogosphere, this card has been upgraded. Steve from White Sox Cards sent me the upgrade, and a few other great Coots in my first blog trade ever. 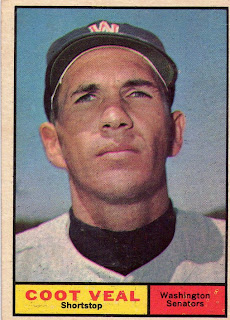 There's another beauty. And again, like in my childhood, I couldn't believe someone would send a stranger such a cool card. Steve was very generous and hooked me on the kind and sagely online personalities of the blogosphere. He also sent this one: 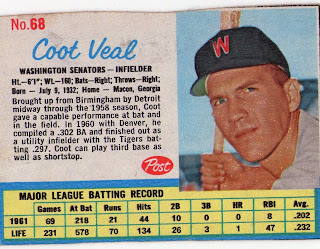 Sweet, sweet 1962 oddball. A Post card rudely cut. I love it. And I love that Coot Veal only had one homerun in his whole career. It's just interesting to think about, how it would feel to have just one homerun. Sure, Barry has all those numbers, but does he remember any one of them like Coot remembers that one longball he barely squeaked over the wall? I'm glad you got one, Coot. I may be your biggest fan.

I'm still looking for Coot's 1963 Topps card, and then I think that's it. If you have it, we should trade. Or check out my want lists. I'm always up for trading. I might not have exactly what you're looking for, but I do have Coot Veal and the Vealtones.
Posted by Dhoff at 4:19 PM 5 comments: