Time to try and get some more trades going. Everything you see is up for trade. 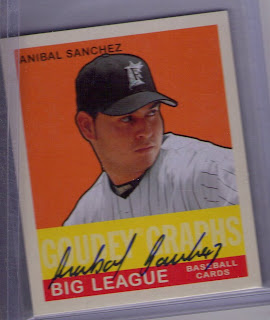 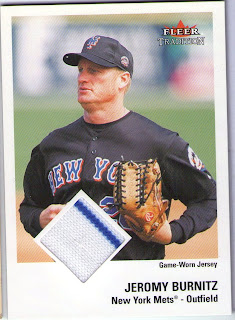 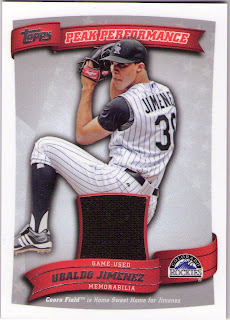 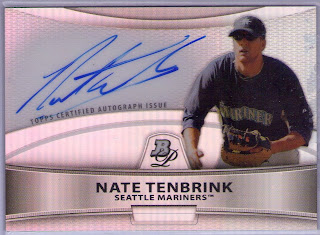 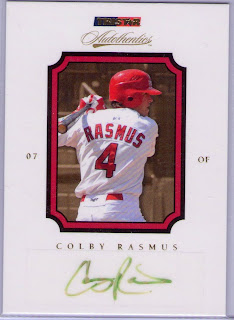 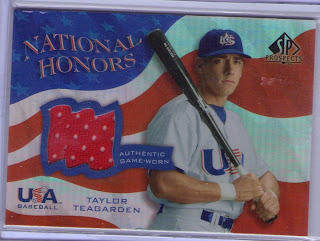 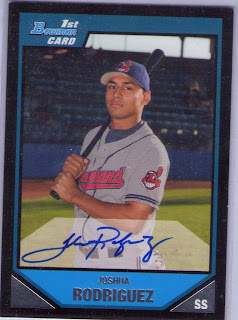 If you see anything you like, leave a comments or send me an email. My want list are at the top of the page, and don't forget to check out the trade bait page, also at the top. Let's do some trading.
Posted by Dhoff at 1:36 PM 3 comments:

Pulling Some Relics from No Relics Pulled

I finally got a trade going with fellow Dustin over at No Relics Pulled. He sent a bunch of great stuff, and as the trade post goes, it's time for show and tell: 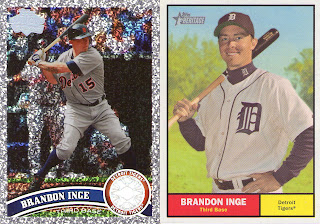 What a smile, Inge. He may not be the best third baseman out there, but just look at those pearly whites. Detroit wouldn't be the same without him. 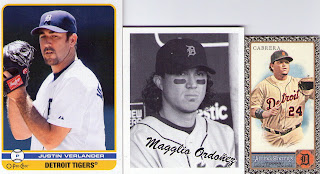 And here's some Tigers of various sizes. Fitting that Verlander stands the tallest in this group. The Cabby card is one of those zebra-print minis. Is that what A & G was going for this year? Trying to bring the zebra-print back. 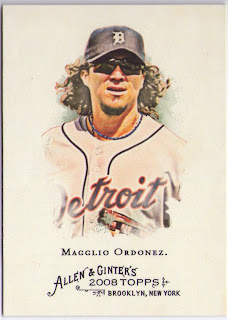 I'm not all that much of a Magglio collector, but this card is great. Has there been more luscious locks featured on a Ginter card than is here? Somebody, get that man a fan to whimsically blow those curls! 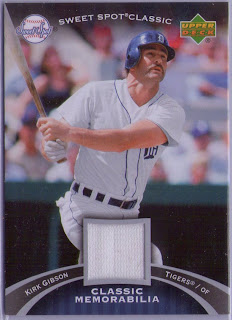 This is my second Kirk Gibson jersey card, and I dig it. Kirk has some serious neck veins going on here. I'm more of a Whitaker and Trammell guy when it comes to epic '80s and '90s Tigers, and their GU cards and autos are much harder to come by for some reason. But I'll never turn down a Gibson. 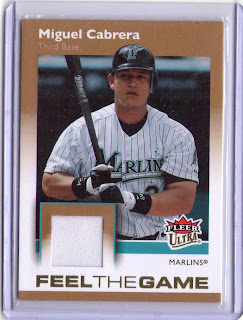 I've been getting a bunch of Cabrera cards in Marlins uniform lately. Sure, it's the wrong uniform, but a Miggy is a Miggy. Another great addition to the Cabrera player collection.
Thanks, Dustin, for the fantastic trade. It took us a while to get it going--silly things like grad school getting in the way--but it was well worth the wait.﻿
Posted by Dhoff at 9:48 AM 2 comments:

I'm behind in my trade posts, so this one is coming quite a while after my trade with The Lost Collector. I sent him a Wang rookie for his TTM auto project and some Yankees, and he sent over some Tigers and Ripkens and Pudges, oh my. A nice easy, trade. Here's some of what he sent: 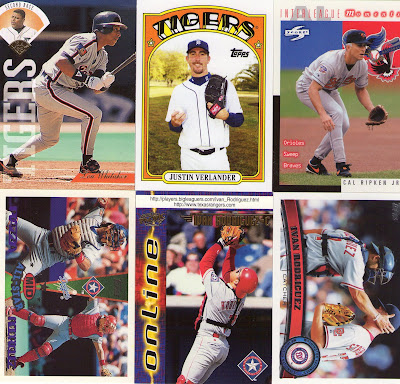 I dig the '72 style Verlander, a Topps Wal-Mart exclusive, I believe. I've been getting less and less of Verlander's cards after the crazy season he had, and I'll probably get even less once he wins that MVP thing. Some great Pudge cards in full gear here. I especially enjoy the Topps card where he's slapping around the Stras.

My favorite card of the trade: 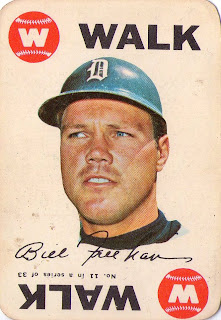 Bill Freehan from the 1968 Topps Game set. I love these cards, and this must have been a double from Lost Collector, since I think he was working on the set for a while. I need to track down the Kaline from this set.

A great trade that hit some player collection needs and included some vintage--something that's always fun to see in a trade, that musty old cardboard peeking out of the bubble mailer. Thanks, Lost Collector.
Posted by Dhoff at 10:21 AM 2 comments:

Email ThisBlogThis!Share to TwitterShare to FacebookShare to Pinterest
Labels: Trade

Vintage Topps Subsets Are the Best

I have to admit that I'm not a huge fan of many of the vintage Topps sets. '55 and '56 are amazing. Don't get me wrong. It's just that many of the later '60s sets lacked luster--all crew-cropped head shots and grainy photos. Call me a blaspemor to doubt early Topps' mightiness, but I'll take vintage Bowman any day. And I think it's that they opted for art and action rather than photo portraits.

Anyway, all this is leading up to some subsets I really dig from Topps' sets venturing into photography. And here's the best example from this subset: 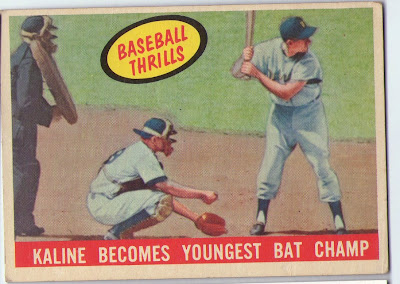 Topps makes their vintage set even more vintage by making the Baseball Thrills subset into art cards. Really, 1959 is one of the better vintage photo sets, in my opinion, but these cards are a highlight. And perhaps this isn't the most action-packed picture, but there's something really nice about getting the full layout of what's going on at the plate. There's Kaline, of course, but we also get the catcher, and then the rarely-featured umpire. All the ducks lined up in a row. Sure, maybe there are more exciting BT cards, but this one's great. 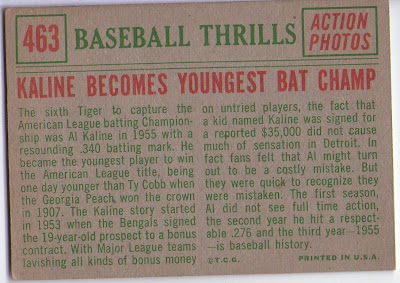 I like the way the backs of these cards are designed, too, mimicking a newspaper article, and still all full of stats like a good back side of cardboard should be.

And I couldn't forget about Fence Busters. 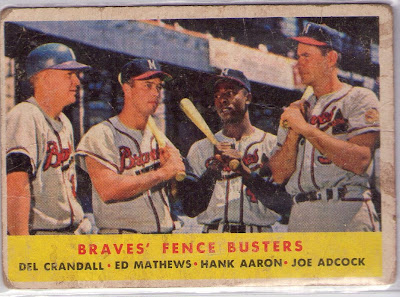 This is a time where Topps' ventures into photography was really working. It's the grouping of heroes that really makes this, something like a Braves Justice League. And the candid style gives this shot a sense of story, makes you think about how cool it would be to be in earshot of this conversation. Of course Hank is the draw here, but I kind of like how he's worked into the foreground, letting these other guys take the front. This shot also makes Hank seem extermely short. He was indeed shorter than these other guys, despite his towering career. But Joe is really only four inches taller than Bad-Ass Henry. 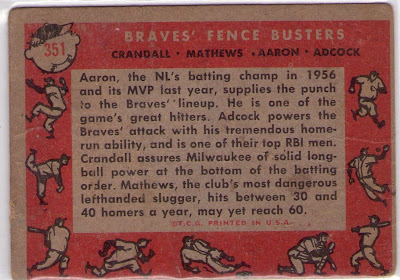 My favorite part of the back of this card is the border of the Topps cartoon guy with his weirdly tiny feet. Have we decided on a name for this guy? How about Artie McWeefoot?


Somewhere along the way, Topps dropped these subsets in favor of league leader cards, which are nice and all, and a good excuse to include more cards of all-stars within a set, but they just don't have the character of these cards.
Posted by Dhoff at 2:34 PM 1 comment:

Another Great Contest at Play at the Plate

Head on over to Play at the Plate and guess the manu-patch. Oh, and thank him for all the great monthly contests he does.