Card Show-Off: Rookies for a Quarter

Following up the last card show post and the mystery of the Willie Mays goo, today we delve into the modernish stuff. All of it comes from the bargain boxes. Without further ado: 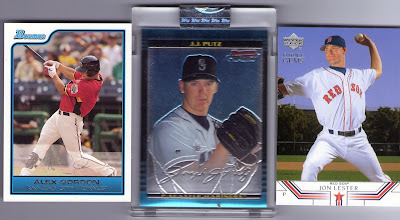 We begin with an assortment of rookies. I love rookies, and these were some nice ones. The Gordon is numbered, the Putz is uncirculated, and Lester is an XRC. Not a bad mix. And they're even better when they each came out of the quarter box. Even better when they were actually 5 for a buck. And then the dealer cut me a deal. I freaking love card shows. Anyway, onward with more from this quarter box. 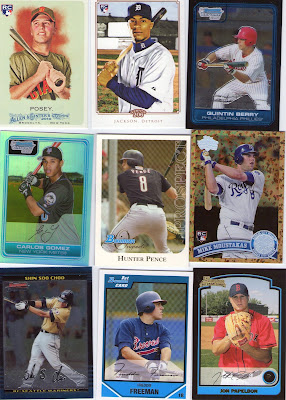 More great steals in this grouping of rookies from the quarter box. I'd been after a Quintin Berry rookie every since his great season last year. I wouldn't mind seeing him back in the lineup. The Pence is nice, and you have to love Buster being haunted by a red demon cloud. Probably best of all is the Carlos Gomez, which is a blue refractor. Gomez is having a career year, and it's cool to have one of the better rookie cards of the dude who keeps showing up on the highlight reel. 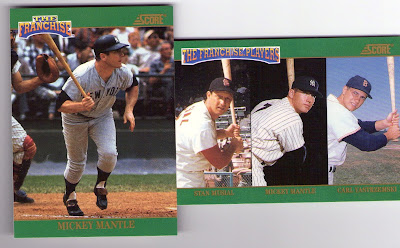 Man, when I was a kid, this was the insert set to get, from '92 Score. I pulled a Musial when I used to rip these. Now I have Mantle and the trio. Now I just need the Yaz to complete the set. According to COMC, there were only 150000 of these made. Holy rare junk wax, Batman! 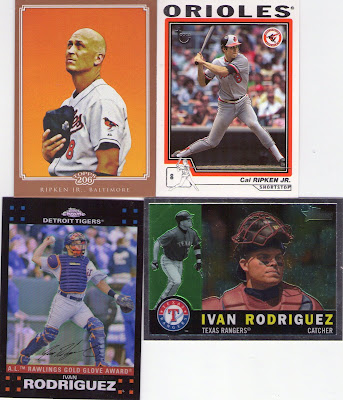 More goodies for the player collections. That Pudge chrome is sweet. 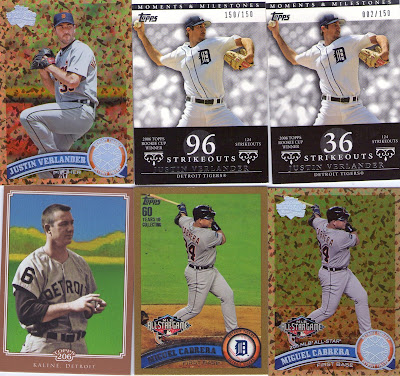 And a few more. I'm such a sucker for shiny parallels. However, I hate the Moments and Milestones sets, which are completely unwieldy for player collectors. But their damn non-rare numbering sucks me in. There were a bunch more Verlanders in this quarter box, but I only picked up these two. Notice the eBay 1 of 1s. 150/150 and 002/150. Hell, what isn't an eBay 1 of 1! 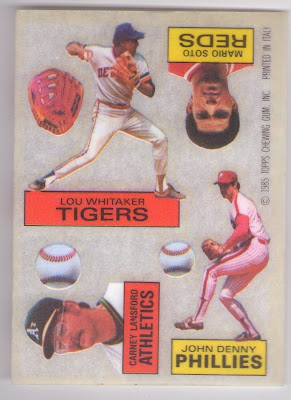 This oddball Whitaker from the dime box may be my favorite find of all. I'm not sure if this is an iron-on or a shrinky-dink or what. Oh, COMC says it's a "Rub Down." Sexy. I love how much those Italian Topps affiliates tried to jam onto these cards. Busy? No way. Just exploding with sophisticated design.

Overall, a great show. Those bargain boxes always make the trip worth it.
Posted by Dhoff at 10:50 AM 4 comments:

The Vealtones are so backlogged we actually have two card shows to showoff. To start, this one was a mall show in Grand Rapids, a show that happens a few times a year. It takes me about an hour to drive to, and it's usually worth it. This time, yup. 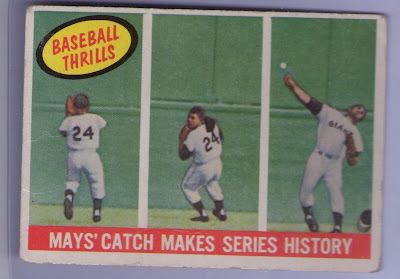 I love the Baseball Thrills subset, and this triptych of Mays' famous catch might be the coolest card in the set. The price tag was--you won't believe this--one dollar. That's right, for just some round corners and subtle creases it was just a single solitary buckaroo.

I didn't even look at the back of the card until I got home, which is when I said, Oh, I see. 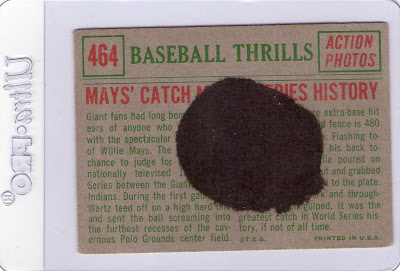 I'm not even sure what this is, but I'm pretty sure this giant glob of tar or spit chaw would ensure that Beckett would refuse to ever slab this card. Still, I'm thrilled to get this for a buck.

I have a very modest and informal Rollie Fingers player collection, which I was able to add to. These all came out of a dime box. I love the Kellogg's card. Rollie's mustache may've been at its creepiest in his Brewers days. 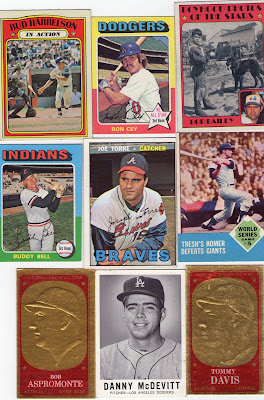 More randomness from the dime boxes. These will all be making their way into trade packages for my pals eventually.

More from the dime box: semi-star rookie cards. I'm a huge fans for rookie cards, especially when they cost me a dime. Dang, I didn't realize Mr. Kingman had 442 career home runs. And Reuss had 220 wins. Nettles, well, he had a brother named Graig. 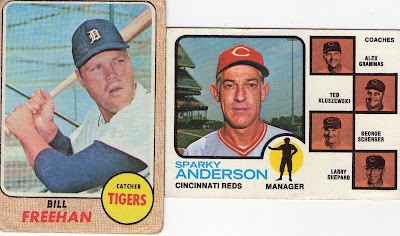 Two fellas I can never turn down for a bargain: Sparky and Bill. Sparky will eventually become a formal player collection, once I get my crap together. Did you know he own a baseball signed by the Pope? 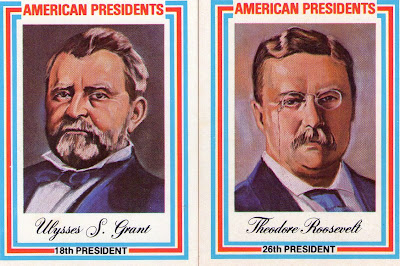 Out of all these great vintage treasures, these were my favorite find. Out of the dime box comes these presidents. I love political cards. I love art cards. I love minis. These are all of the above. I guess they're 1974 Panographics, according to COMC. I don't know anything else about them, but I'm curious. I especially love the Teddy Roosevelt card. I took a doctoral lit class based on literature associated with Teddy. The man was brilliant, read a book a day and remembered every single word he read. Too bad our presidents don't herald literature like that anymore.

Anyway, great finds. Next post, I'll show the modern cards.
Posted by Dhoff at 7:42 AM 3 comments:

Last night, I finally finished updating my player collection lists on the blog. You can find them on the upper right of the page if you're interested. They're just big ol' lists of every card I have of the players I collect. But those lists mean a lot to me. I love lists. I love organization. It feels like an accomplishment to file a card away, to add it to my ever-growing list. I think there's something about most of us collector's that love this kind of zen-like practice. Well, it's zen-like on the best days, calming and gratifying. Other days, when we're trying to clean up the card closet or faced with a bunch of big stacks of disorganized cards, it can feel a bit more like a hurricane recovery or like one of Dante's circles.

Anyway, I finally got my lists caught up. Mind you, I still have to put cards in their respective player collection binder, but at least the cards are noted. This process involves me sitting with a stack of Kalines or Pudges and typing the card number and name into Check Out My Cards or eBay until I find the right listing. This is how I do it, anyway. While going through those stacks and researching the cards, I was reminded of some of the great new cards in the collection. So, I'll share them with you now. 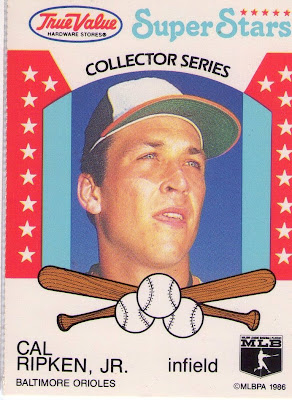 Here we have some quintessential oddball. This is a 1986 True Value card that's just oversized enough to not fit in most binder pages. It's big and goofy and features Cal with a half-open mouth, as if he were about to spew. It's terrible, and it's perfect. I nabbed this card from Eutaw Street Cardboard's virtual dime box, and now it's in its proper place: my Ripken player collection. 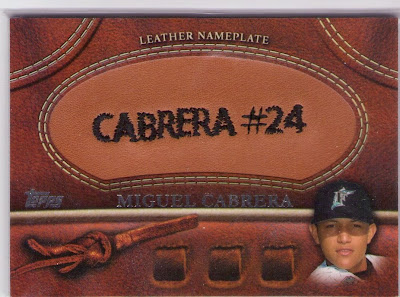 From oddball to manu-gimmick, here's a 2011 nameplate thingamajig of Mr. Triple Crown. I think this was about a buck shipped off eBay. Quite a bargain for a card that I'm not sure what to call. A hit? An insert? A piece of fake leather and some cardboard? I'll call it a new member of the Miggy player collection. 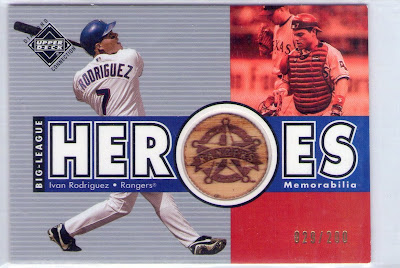 And to the Pudge player collection goes this 2002 UD Diamond Connection bat chunk, which they just couldn't leave alone. They had to bust out their pyrography skills and plaster this with a Rangers logo. 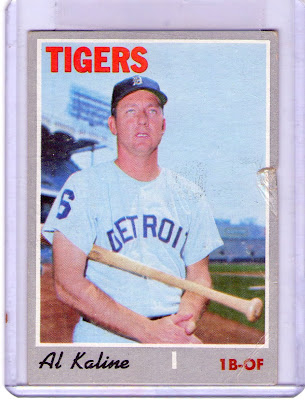 This 1970 Topps high number Kaline had been teasing me for a while, but I finally found one it beat-up enough condition to fit my budget. Kaline looks a little pissed off at whatever's going on up in the stands. Willie Horton's doing the chicken dance naked or something. With it's creased corner and busted side, in this piece of cardboard goes to the Kaline player collection. 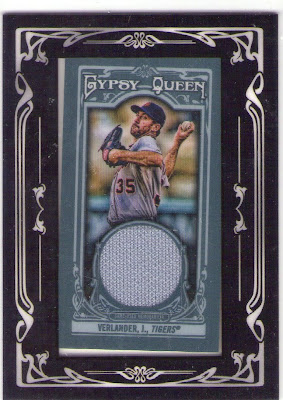 This Verlander came in a trade from the Daily Dimwit with some other great cards I'll post later, since I'm perpetually behind in my trade posts. I love this card, really dig the black border. Verlander's having a bad year, I hear a lot of my fellow Tigers fans saying. But if any other player was having this year it would be their career year. I'm never worried about Justin, and always thrilled to add a card to the Verlander player collection.
Phew. That does it for me. I've updated my lists and posted a new card from each collection. I'll call that a post. And now you can help me screw these tidy lists up by trading me some cards I don't have listed. I'm ready for you.
Posted by Dhoff at 2:24 PM No comments:

Off to Watch the Tigers, and Kaline Approves

Once a year, for my birthday (which isn't for another couple of weeks) I mosey down to Detroit to watch the Tigers play. I've had some bad luck at games in the past. One year I saw both Magglio Ordonez and Carlos Guillen get seriously injured in the same game.

But last year was better, and tonight should be great. Thanks to Stub Hub and my wonderful wife, I'm sitting 35 rows back from home plate. Closest I've ever been. Should be a great view. 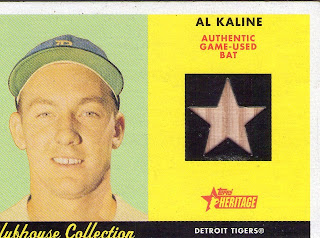 To celebrate here's a random off-centered scan of a Kaline I recently acquired off the Bay. I'm feeling as bright-eyed and smiley as young Kaline tonight. Here's to a Tigers win!

Today's iconic rookie post is brought to you by the year 1976 and upper lips that aren't covered by mustaches, but definitely should be. 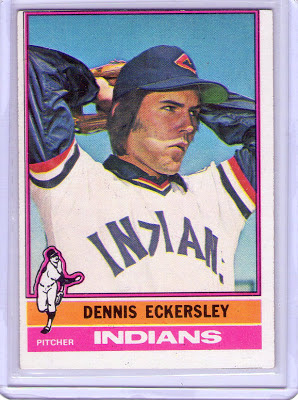 Dennis' mom got him to shave up nice for his rookie card picture day. Unfortunately, he snuck in some patchy sideburns. Nice work on being super '70s, Eck. There's just something about a commonly mustachioed player missing facial hair that makes a rookie card that much more fun, thus we have Eck's 1976 Topps rookie car.
I snatched this card off eBay for right around $2 shipped. It took a little patience and a high tolerance for terrible centering, and now it's a part of the rookie collection. There's a lot to love about this card: the old school Indians lettering, the intensity in Eck's windup stare, the chaw in the cheek, and, of course, the always-trendy windbreaker-under-the-jersey look. We have so much awkward '70s-ness here, this card could be nothing but iconic.
And then there's Eck's career. Is there a better starter-turned-closer story out there? A bevy of awards in 1992, including the Cy Young and MVP, 51 saves and a crazy 1.91 ERA. 1992 was a big year for me, my second year seriously collecting cards as a kid, and Eckersley was an icon. Most memorable was his lustrous mullet and porn star mustache. No man ever wore the combo as well. So, today, we here at the Vealtones salute Mr. Eckersley's iconic rookie card. Get to growing that hair, young Eck.﻿
Posted by Dhoff at 9:18 AM 1 comment: